Railroad Earth gives back in honor of Andy Goessling As a founding member of Railroad Earth, Andy Goessling played multiple instruments, was a product of music education, and passionate about mentoring young artists. In memory of him, we partnered with the band—who also rallied friends, family, and fans—to donate an Intro To Music Grant to Fourteenth Avenue Elementary, an all special needs school in Newark, NJ. (Photos courtesy of Erin Mills) Before the event started, students had the opportunity to try out the upright bass.

Then the band took the stage to perform a couple of their hit songs. The crowd loved it and there were even a few audience members in the back dancing along on the floor! At one point, each member went up to demo their instruments which included the piano, banjo, mandolin, fiddle, bass, guitar, and drums.

Students then had the chance to ask the band questions like how many instruments each member plays and how they decided on which ones to take up. The upright bassist gave great advice which was that it may only take a short period of time to learn an instrument but it takes years to master.

Now it was time for the students to perform! They did an amazing job singing two songs accompanied on the piano by their wonderful music teacher.

Then came the big reveal. Everyone joined in counting down and unveiling the brand new instruments donated to the school! 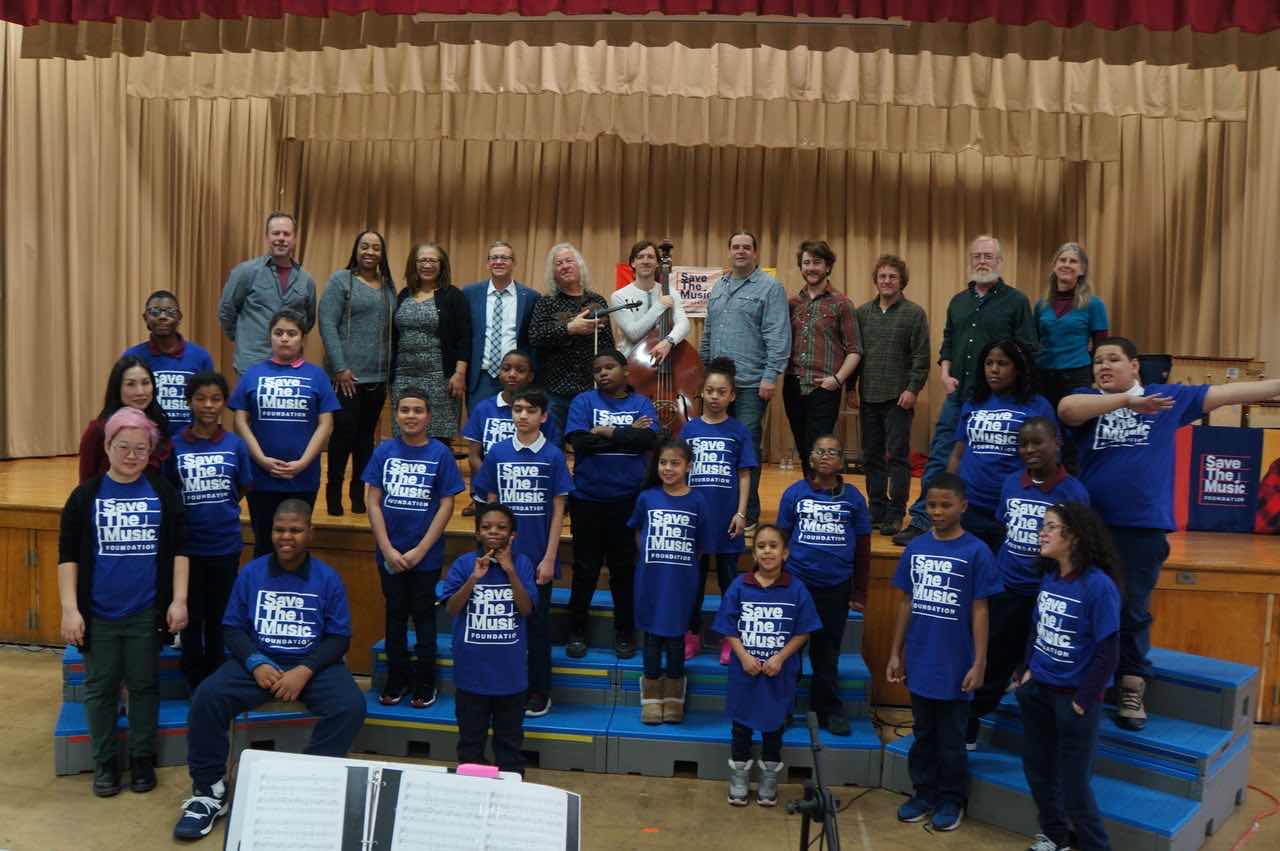 Railroad Earth and their incredible community have raised more than $27,000 and counting for Save The Music! The Intro To Music Grant they donated to Fourteenth Avenue Elementary marks our 26th school grant in the district. By 2022, we estimate that close to 100% of Newark students will have access to music education.

Thank you to Railroad Earth for carrying on Andy’s legacy and giving more kids the opportunity to learn an instrument in school!

About Railroad Earth: When they started out in 2001, they were a bunch of guys interested in playing acoustic instruments together. As Railroad Earth violin/vocalist Tim Carbone recalls, “All of us had been playing in various projects for years, and many of us had played together in different projects. But this time, we found ourselves all available at the same time.”
Songwriter/lead vocalist Todd Sheaffer continues, “When we started, we only loosely had the idea of getting together and playing some music. It started that informally; just getting together and doing some picking and playing. Over a couple of month period, we started working on some original songs, as well as playing some covers that we thought would be fun to play.” Shortly thereafter, they took five songs from their budding repertoire into a studio and knocked out a demo in just two days. Their soon-to-be manager sent that demo to a few festivals, and – to the band’s surprise – they were booked at the prestigious Telluride Bluegrass Festival before they’d even played their first gig. This prompted them to quickly go in and record five more songs; the ten combined tracks of which made up their debut album, “The Black Bear Sessions.”
That was the beginning of Railroad Earth’s journey: since those early days, they’ve gone on to release five more critically acclaimed studio albums and one hugely popular live one called, “Elko.” They’ve also amassed a huge and loyal fanbase who turn up to support them in every corner of the country, and often take advantage of the band’s liberal taping and photo policy. But Railroad Earth bristle at the notion of being lumped into any one “scene.” Not out of animosity for any other artists: it’s just that they don’t find the labels very useful. As Carbone points out, “We use unique acoustic instrumentation, but we’re definitely not a bluegrass or country band, which sometimes leaves music writers confused as to how to categorize us. We’re essentially playing rock on acoustic instruments.”
Ultimately, Railroad Earth’s music is driven by the remarkable songs of front-man, Todd Sheaffer, and is delivered with seamless arrangements and superb musicianship courtesy of all six band members. As mandolin/bouzouki player John Skehan points out, “Our M.O. has always been that we can improvise all day long, but we only do it in service to the song. There are a lot of songs that, when we play them live, we adhere to the arrangement from the record. And other songs, in the nature and the spirit of the song, everyone knows we can kind of take flight on them.” Sheaffer continues: “The songs are our focus, our focal point; it all starts right there. Anything else just comments on the songs and gives them color. Some songs are more open than others. They ‘want’ to be approached that way – where we can explore and trade musical ideas and open them up to different territories. But sometimes it is what the song is about.”
So: they can jam with the best of them and they have some bluegrass influences, but they use drums and amplifiers (somewhat taboo in the bluegrass world). What kind of music is it then? Mandolin/vocalist John Skehan offers this semi-descriptive term: “I always describe it as a string band, but an amplified string band with drums.” Tim Carbone takes a swing: “We’re a Country & Eastern band! ” Todd Sheaffer offers “A souped-up string band? I don’t know. I’m not good at this.” Or, as a great drummer/singer/mandolin player with an appreciation for Americana once said: “Rock & roll!”